WARCI member Bob Paquette’s microphone museum located in Milwaukee is a treasure that many of us may not be aware of. It’s a safe bet that Bob’s is the largest microphone collection in the world. It includes well over 1,000 different makes and models of microphones as well as related pieces of equipment (desks and floor stands, microphone enclosures, transformers, preamplifiers and test equipment). The emphasis is on historically important microphones made between 1876 and 1950, but you will also find early radios, telephones, and many other communications devices, including an assortment of military gear.

Bob has been researching the history and evolution of microphones for over 50 years. He published an article “Early Microphone History” in the A.W.A. Review, Volume 4 (1989) and articles in Don Patterson’s Radio Age, “Broadcast Microphones of the 1920’s” and “Early Condenser Microphones”. His research culminated in his 842 page book, “The History and Evolution of the Microphone”. In the course of his work he has amassed a large 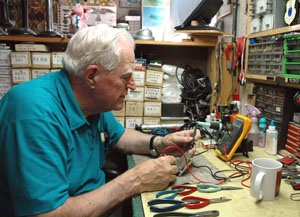 number of interesting microphones, many that are rare and unique, including one of a kind prototypes from RCA and Western Electric, the leaders in quality broadcast equipment during the Golden Age of radio. There is also a huge collection of microphone related paperwork, including specification sheets, patent copies, catalogs, advertising literature, technical papers and copies of articles that appeared in early books, magazines, and technical periodicals.

Bob displayed an early interest in electronics and by the time he reached his teens was repairing radios for his Merrill Park friends and neighbors. Bob served in the Air Force where, among other things, he taught basic electronics. In 1950 he started Select Sound Service from the basement of his home near Thirty First and Clybourn, thus sparking his interest in early microphones. In 1958 Select Sound moved to Fifty Fourth and Vliet. It moved to the present location on First and National in 1976, and the museum followed shortly thereafter. Over the years Bob has become friends with some of the engineers that designed these incredible old mics for Western Electric, RCA, Shure, Turner, and many other manufacturers. He also has many contacts in the broadcast industry and stays in touch with other collectors from around the world. Knowing the right people is just one way that Bob has put together this outstanding collection.

Bob’s newest project is a full size replica of the radio room of a WWll era B-17 bomber including all electronic equipment. This project is still in the early stages and is coming along nicely. It will be housed in a room 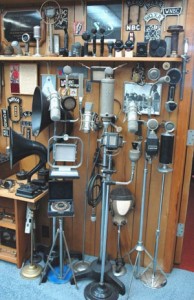 adjacent to the museum. On entering the museum, the sheer quantity is staggering, but after closer inspection you will find that the quality is even more impressive. Although the primary focus is on American made microphones, you will also find mics from all over the world including early German condenser mics, ancient double button carbon microphones from around the globe, and ribbon microphones from England, France, Australia, and Japan. Crystal and dynamic mics from the U.S. and other countries are also well represented. But the real joy is in exploring the huge assortment of rare and beautiful broadcast microphones. I have visited this remarkable museum many times and I still find things that I had not noticed before. Although a number of photos are shown in this article it only scratches the surface.

You can see more photos and find out more about Bob’s book “History and Evolution of the Microphone” at his website:

But the museum must be seen in person to be appreciated. Bob always enjoys visitors and will be happy to give a guided tour to individuals or groups. You can call Bob at Select Sound (414) 645-1672 to arrange for your visit. Just ask for Bob Senior. The museum is located on the second floor of Select Sound, 107 E. National Ave. Enjoy your visit and allow yourself plenty of time. You won’t want to leave! 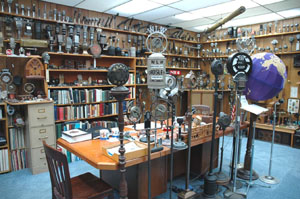