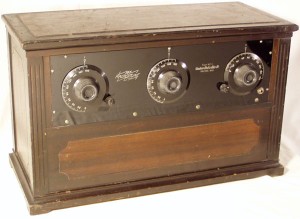 This is the first in a series of articles about Wisconsin Radio Manufacturers. During the 1920’s, 1920’s, 1930’s there were at least 50 different Wisconsin companies “making” radios or radio components. Some were sold under their own brand names and others were sold under different brand names. Some of the companies were contracted by other companies to manufacture radios. Some of the local brands were made elsewhere. 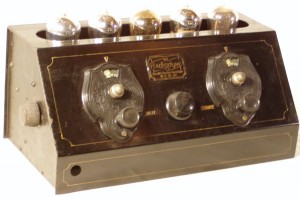 There were also several radio supply companies operating in Wisconsin. They provided ready-made radio sets and all of the parts for the do-it- yourself set builders.

The featured company in this issue is Western Coil and Electrical Company from Racine, WI. Western Coil was started in 1915 by William Turnor Lewis and his father. In 1920 they made the Western Coil 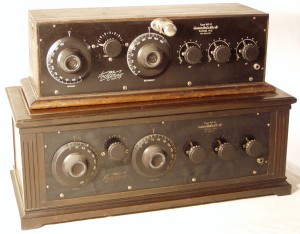 Type A crystal radio.  It was packaged in a small wooden box with a hinged cover. The radio was on the right side and a compartment on the left side held the headset. It is similar in appearance to the Borchert-Manegold Mfg Co crystal set, Westinghouse Aeriola Jr. crystal set and the Western Electric 44001 crystal set. It appears that it was manufactured prior to all of these other sets. (1).

In 1922 Western Coil made the Lewis set. It is a large upright cabinet with a 4-tube battery set with 4 glass filled portholes. (2).

The WC-Radiodyne series of battery radios was introduced in 1923 and manufactured until at least 1927. They used the phrase “The Voice of the Nation”. References indicated that the company manufactured radios into the 1930’s and then made non-radio items until about 1978. (Some of the local WARCI club members were present at a sale in Racine in the 1980’s or 1990’s in which new-old-stock radios, cabinets and components from Western Coil were sold at auction.) The early battery radios included model numbers such as WC-4, WC-5, WC-5B, WC-5-SW, WC-6, WC-10 and so on thru WC-22. It appears that some of the sequential numbers may have been skipped. Available cabinet styles included a compact wooden cabinet with a split hinged top, a couple of variations of slightly larger wooden cabinets with fully hinged tops (types A and E), a deluxe (ornamental) wooden cabinet (type G), and a console (type C). The model WC-15-Jr. was made in a compact black crystalline finish metal cabinet with all 5 tubes projecting thru the top. A tube cover was initially included but the tube cover is seldom seen. Western Coils also produced a speaker cabinet equipped with a Western Electric speaker. (3), (4), (5). 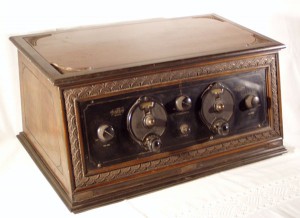 attempted to register the same name.  Since Western Coil was able to demonstrate that they had been using the trademark, Atwater Kent was not allowed to use it. In the mean time, Atwater Kent had launched an extensive marketing campaign using the term “Atwater Kent Radiodyne – The Wonder Set”. They manufactured and sold Model 10 No. 4340 breadboards with the “Radiodyne” trademark. They had to retool and change the transformer coil nameplates on later models. Apparently Atwater Kent was allowed to sell what they had made. Occassionally, AK “Radiodynes” show up for sale. (6).

1. For photos of Western Coil Type A , Borchert-Manegold and the Aeriola Jr crystal radios refer to “Crystal Clear Vol.1 and 2”, by Maurice L. Sievers. Photos of the Western Electric and Aeriola Jr crystal radios can be seen in “Radiola The Golden Age of RCA” , by Eric Wenaas.
2. To see a Western Coil “Lewis” radio on display, visit the Pavek Museum of Broadcasting in St. Louis Park, MN.
3. For additional WC information refer to Radio Manufacturers of the 1920’s Volume 3 by Alan Douglas. This book contains ten pages of photographs and information about WC.
4. More WC information is available thru a series of 20 articles written by Eric Sanders and published in Radio Age. The Mid Atlantic Antique Radio Club (MAARC) has archives of the series of articles.
5. For tube compliments and additional descriptions refer to the Western Coil listings in the “Battery Set Compendium 1914-1929” by Greg Hunolt.
6. Information about the Atwater Kent “Radiodyne” breadboards is available in Radio Manufacturers of the 1920’s, Volume 1 by Alan Douglas, The AWA Review Volume 12 published by the Antique Wireless Association and the book “A. Atwater Kent, The Man, The Manufacturer and His Radios” by Ralph Williams and John P. Wolkonowicz, edited by Donald O. Patterson.

Photos are from the authors’ collection. Any additions or corrections to this info are welcome. The author is interested in communicating with others who have information or questions about Western Coil radios. 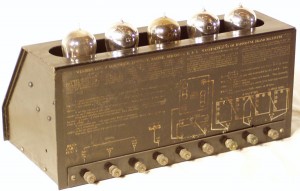