Early Broadcasting and the Milwaukee Journal

As mentioned in my previous article, radio broadcasting in Milwaukee began at Gimble Brothers in April of 1922.  Within days, The Milwaukee Journal organized a demonstration of radio and was quick to sponsor radio programs in Milwaukee. But it wasn’t until 1927 that WTMJ went on the air.

The Milwaukee Journal followed the progress or radio from the beginning.  Its marketing staff was aware of who was selling radios, how many radios Milwaukeeans had, and which radios they were buying.  In 1925 they reported that 4.68% of radios bought in Milwaukee were Globe’s Radios made in Milwaukee by Globe Union. 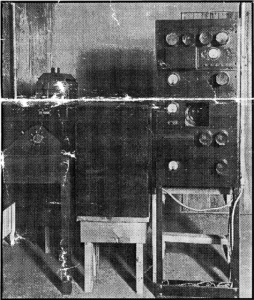 By 1931, the Journal was transmitting television pictures.  Included here are two pictures of their television equipment.  The station, W9XD, continued broadcasting until 1938, when FCC changed rules and stopped The Journal from broadcasting.  The transmissions were the old spinning disk type, which gave an inferior picture.  Their transmissions, however, were on the VHF band – a very progressive move.  In 1934, The Journal experimented with fax transmission, sending signals from atop the Schroeder Hotel to special receivers.

After the FCC closed the Journal’s television transmission in 1938, The Journal applied for the first commercial station in the country.  The request was turned down, as the issue of standardization had not been resolved.  On [sic] 1941, The Journal received a license for W9XMJ on Channel 3.  WWII put an end to TV in Milwaukee, but they began transmitting again in December of 1947, claiming to be the eleventh station in the U.S.  The Milwaukee Journal also lays claim to the first local color television broadcast.  On July 18, 1954, the popular local show “The Grenadiers” was shown to the few Milwaukeeans who had a color TV.

The Journal was also a pioneer in FM transmission.  The Journal’s first FM station, W9XAO at 55M, was on the air in January of 1940.  The Journal claimed to be the 5th FM station in the Nation, and the first “West of the Alleghenies.”  During WWII the frequency band of FM was changed, and the Journal broadcast on 92.3M.  The Journal stopped transmitting FM in 1950, citing the lack of profits.  The Journal returned to the air in 1959, as WTMJ FM. 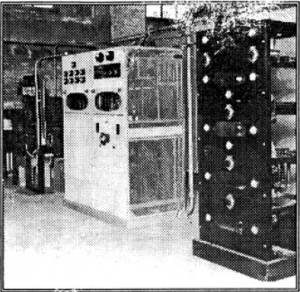 TV camera circa 1931 and probably the FM transmitter from 1940.
Photo courtesy of Milwaukee Historical Society