Westinghouse Electric and Manufacturing Company was one of the first to enter their new radio business.

When Westinghouse put radio station KDKA on the air in November of 1920, the only microphones that were available at that time were telephone transmitters in the telephone sets.  The “candlestick” telephone was an ideal microphone for this purpose, since it only contained the transmitter, receiver, and switch.  The transmitter could be rewired through the switch with the receiver out of the circuit.  This gave them a microphone on a desk stand with a switch operated by the weight of the receiver.  If you looked into the Broadcast room and saw the receiver hanging on the stand, you knew you were “off” the air.  If you saw the receiver off the stand on the table next to the stand, they were “on” the air.

Westinghouse made microphones for their own use up until 1928.  One of these microphones was called the HUSHAPHONE.  This microphone was the result of the problems they were having because the broadcast room was being used for everything and everybody involved with the station.  Sometimes three or four people would be working in the room on engineering, service work, script writing, etc. 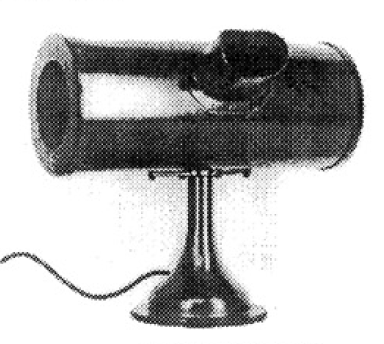 A fan stand was used as a base for the cylinder which was lined with 1/2″ hair felt.  The microphone element was mounted inside to one side of the mouth piece.  Today this microphone would be called a close talking or noise cancelling microphone.  Because the announcer’s mouth was so close to the microphone, the microphone volume control could be lowered considerably and extraneous noises would be eliminated.

This microphone was not very popular because some announcers smoked and drank liquor.  The mouth odors were absorbed by the felt lining inside the cylinder and retained.  Some announcers wouldn’t go near that “smelly thing”!

2 thoughts on “Westinghouse Microphone – The Hushaphone”