Nunn radios were made in Milwaukee for more years than any other local manufacturer.  The Nunn-Landon Company successfully made the transition from battery sets to A.C..  Nunn sets included floor models, large number tube sets, superhets, tombstones, and even cathedrals.

The Nunn-Landon Company was formed in 1925 and ended in 1930.  It seems likely that Ewing Nunn was making radios before the company was formed, as some early radios are simply marked ED Nunn.  Some others are labeled ED Nunn but also have a Nunn-Landon tag.  In a magazine ad in 1930, Nunn claimed to have made radios as early as 1922.  This date appears to be an exaggeration.  Nunn apparently used the Cascade name for sets made in the early thirties, but it is most likely they were made in Chicago.  By 1935 Ewing Nunn was using a Chicago address for his business.

The factory address for the Nunn-Landon Company was listed as 1115 North 4th Street.  That would place it just north of the Bradley Center Building.  Was it a showroom too?  Possibly, but hard to say.  An early Nunn-Landon set indicated that it was distributed by the Hansen Storage Company who did have a showroom for their own radios.  Later advertisements indicate that they were being distributed by Flanner-Hafsoos. 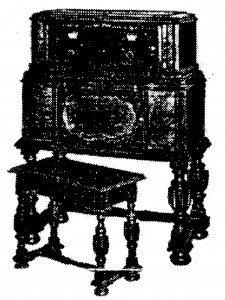 Ewing Nunn was the son of Henry L. Nunn, the President of Nunn-Bush Shoes.  Early on his father was an officer in the Nunn-Landon Company.  Henry Nunn was a well-known Milwaukee figure.  In 1936, the Milwaukee Journal made him “Man of the Year”.  Henry Nunn wrote two books; his first was a popular book on labor relations.  Henry advocated a profit sharing system for employment, a system later adopted by the Milwaukee Journal.  The Journal adopted the system, by its own account, to prevent a hostile takeover.

Ewing Nunn apparently maintained his business in Chicago until 1937.  He returned to Milwaukee area about that time.  He started Audiophile records in the forties and primarily recorded Dixieland music.  He continued his recording business until the sixties and would do primarily vanity pressings and folk music.  At least one pressing of folk music, Blues, Rags, and Hollers, is still sought by collectors and has been reissued on a CD.  Nunn had other businesses too.  He owned Northern Signal Company which made light signals for railroads and flashing lights for construction sites.  Northern Signal Company was located in Saukville.  He also owned a company down south called Southern Signal Company.  Nunn’s studio was located in Saukville, but many of his recordings were done on location.  According to the musicians who worked for him, he was a hard and demanding taskmaster.  I have one of his recordings.  Not only is the recording well done, the commentary on the music is very professional.